As you may have noticed in my previous, criminally short introduction, there were no pictures of any actual honeypot ants. Given that this is a series of blog posts centered around these ants, that might seem strange and self-defeating. I would personally agree: at this point, I don’t remember why I thought it was a good idea. But you know what? Let me make that up to you. We’re going H-A-double-M on pictures today, folks: welcome to the porn-free, image-palooza post. And as my good friend and curatorial fellow at the Art Institute of Chicago, Stephanie Koch would like to say, something something picture thousand words, blah blah. 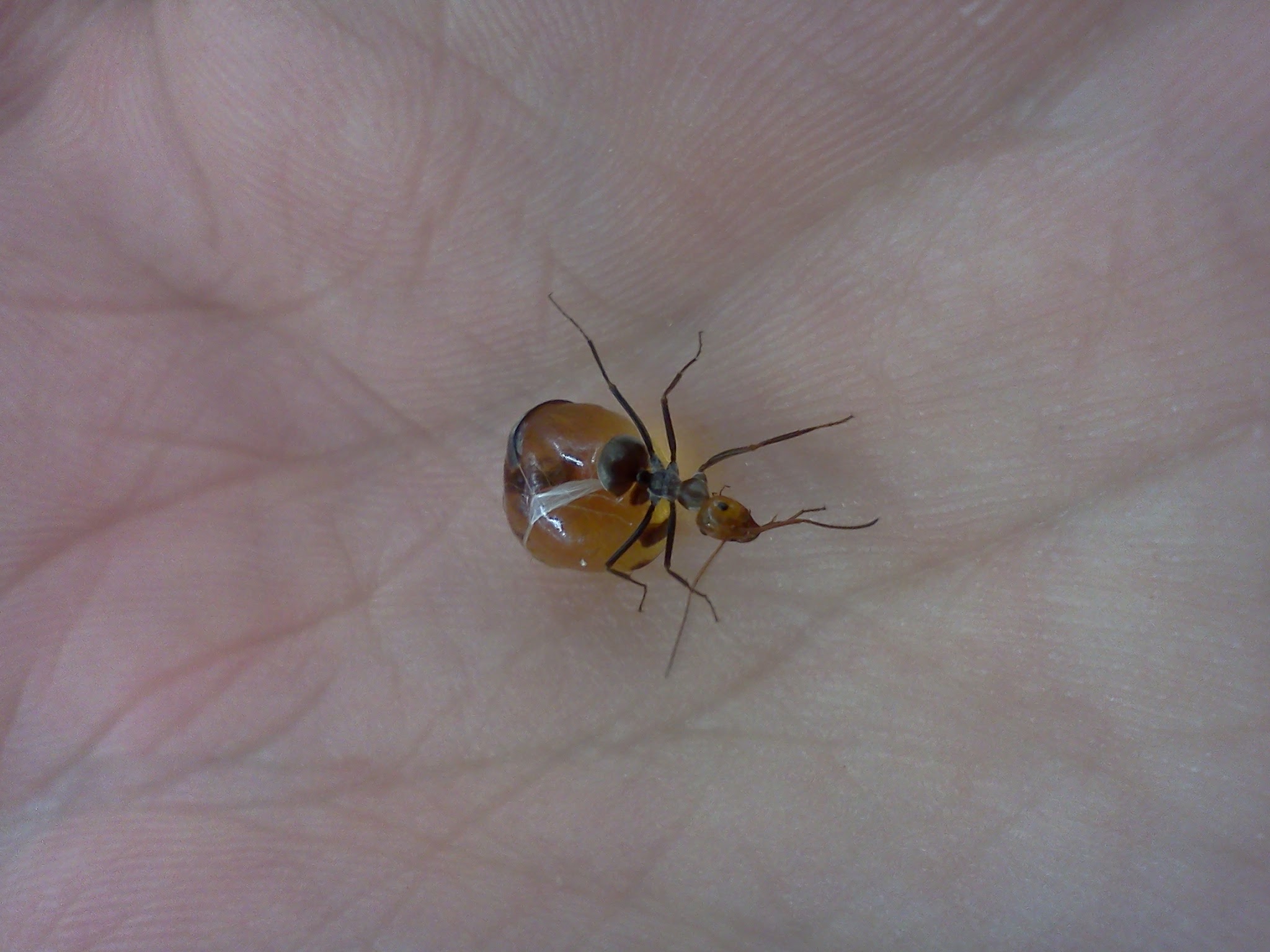 I took this photo. Enjoy it.

So I think a good moniker for these ants would be something like “Public Mysteries.” Everybody (at least in Australia) is partially familiar with them, but… does anybody really KNOW them, maaaaan? As few ants manage, these ants exist as an actual public presence.

Case in point: THERE ARE GIANT, BEAUTIFUL MURALS DEDICATED TO THEIR GREATNESS! 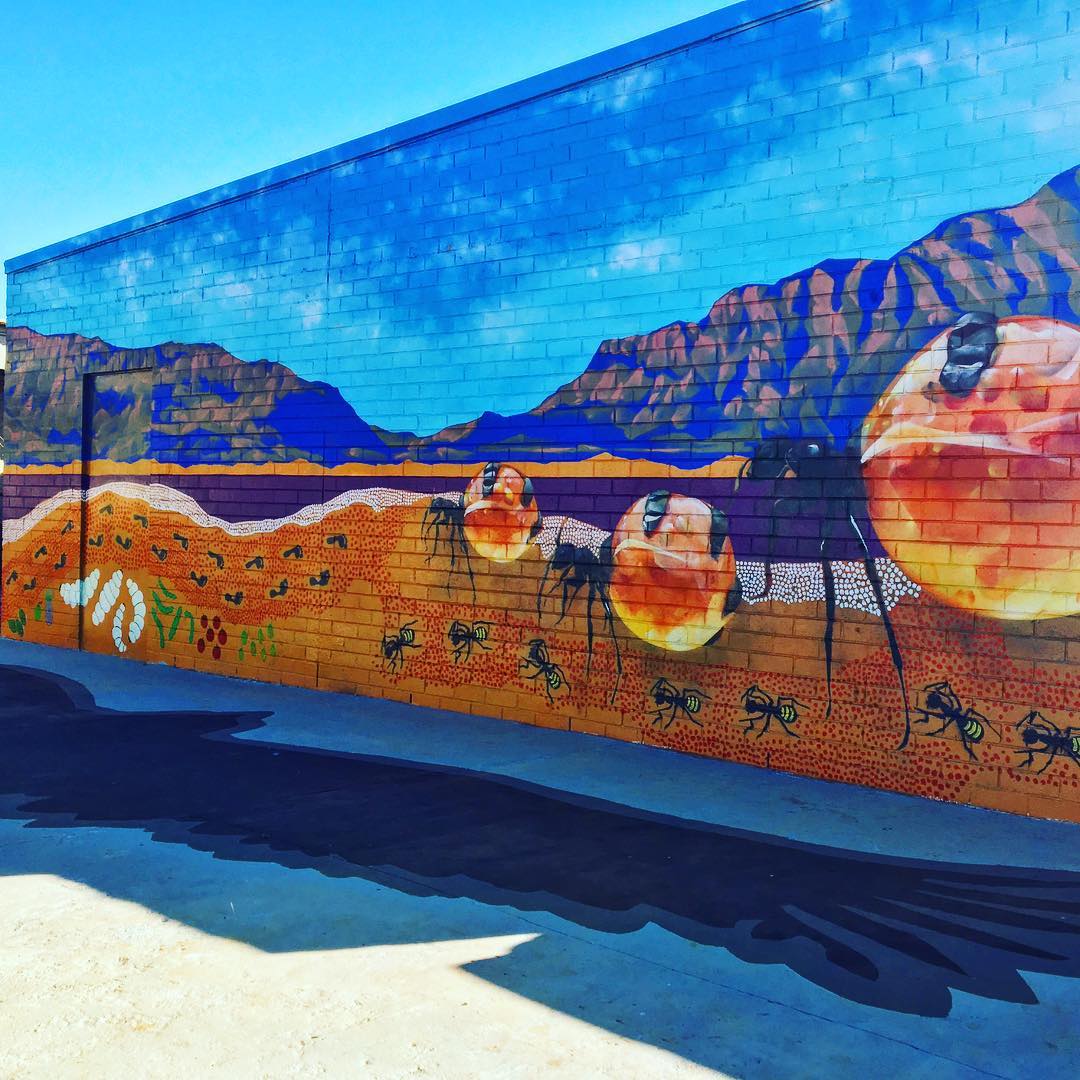 I wish Americans had this kind of respect for ants... (Andrew Bourke)

Not only are they on the literal walls that make up our lives, their likeness is also plastered across the internet (more on THAT next post). Young often artists try their hand at depicting these cheerful, charismatic ants. 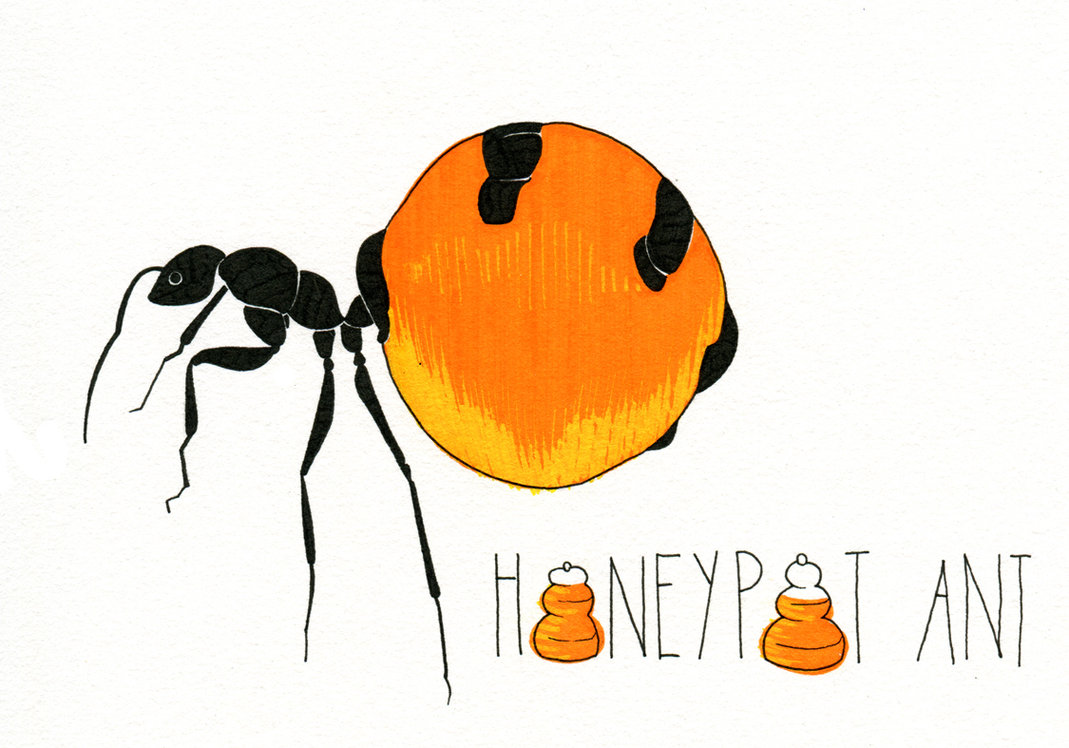 They also include them in fun, “educational” blurbs like this one. 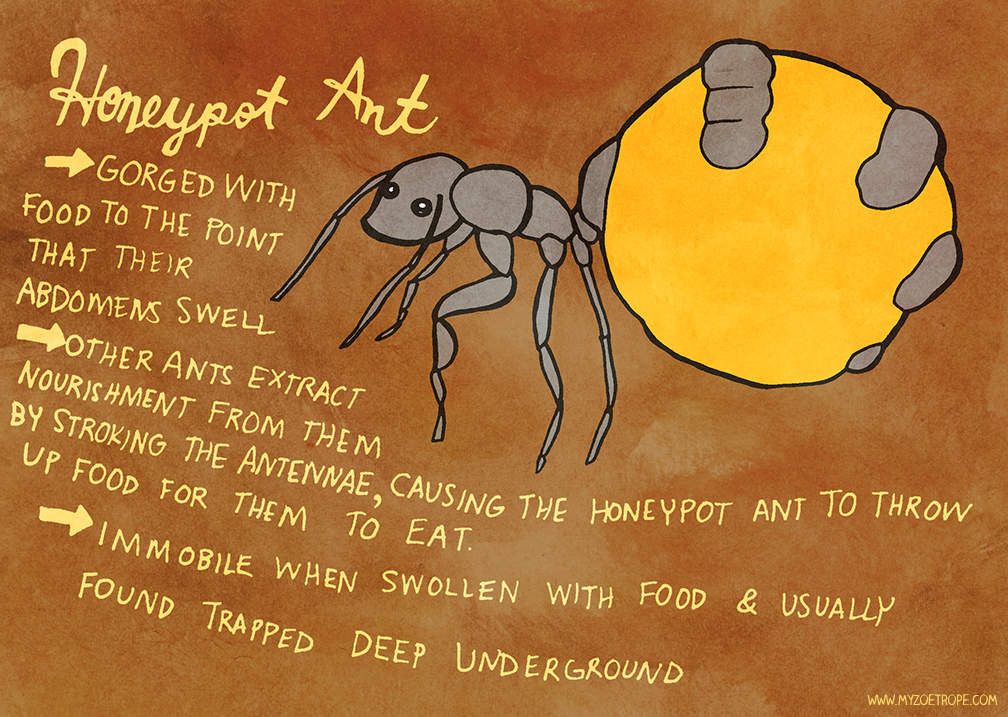 All these "facts" can be summed up as "honeypot ants get filled with honey." We truly understand these ants, I think. (Michelle from myzoetrope.com)

These ants even get recycled into YouTube videos describing fantasy worldbuilding. With so many people capturing the visual essence of this ant, how could ANYTHING be left unknown? 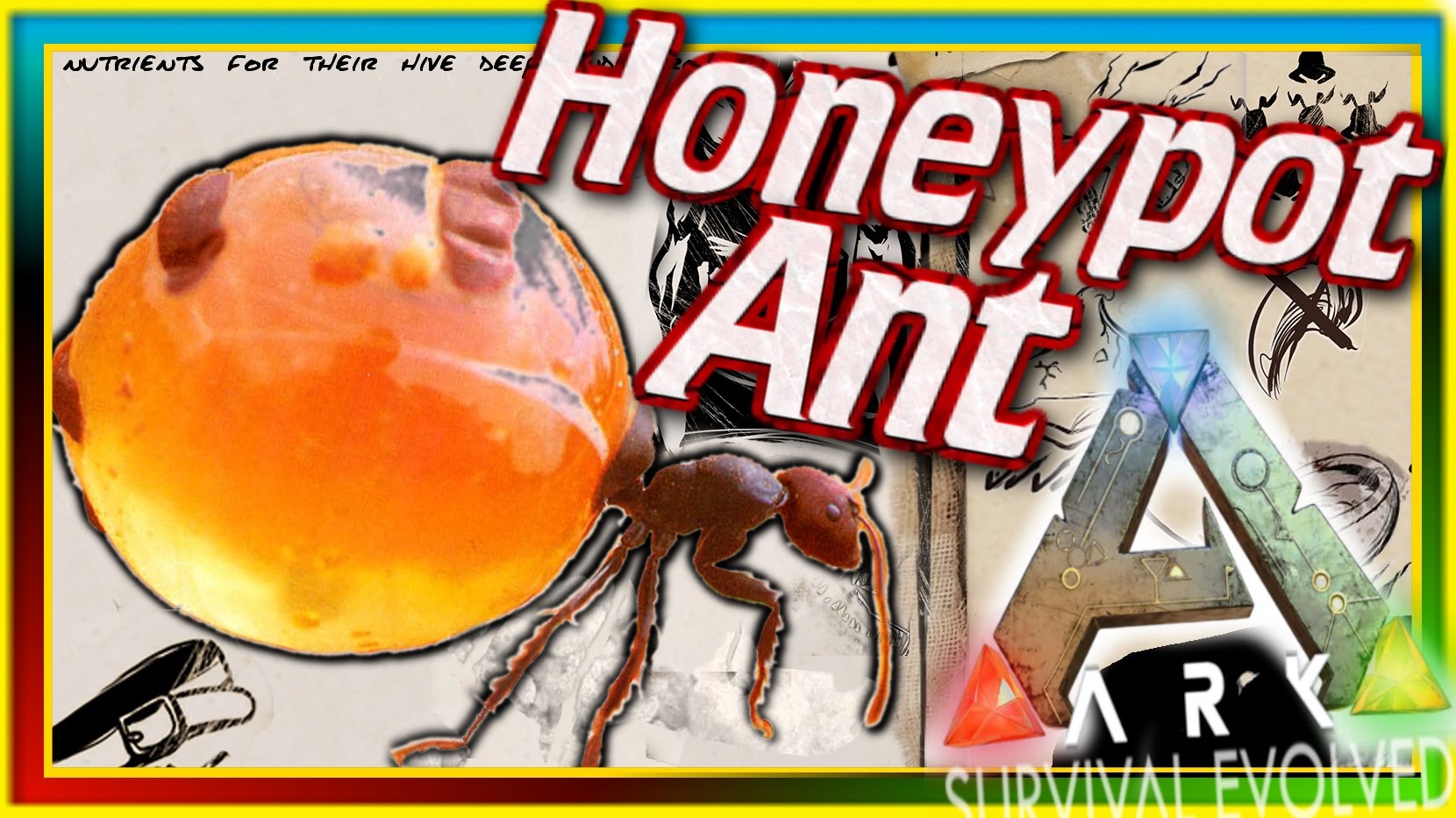 Worldbuilding is actually pretty dope. (It's what Tolkien did with LoTR.) Honeypot ants are crazy enough that they *already* sound like a fantasy piece. (YouTuber Xylophoney)

Ah, hopefully by now, dear reader, you have both come to understand sarcasm on the Internet and have begun to perceive a certain… “consistency of form” in the above images. In the same way that our “educational” art card has recorded, in three bullet points, THE SUM TOTAL OF EXISTING KNOWLEDGE ABOUT THESE ANTS—the same few, endlessly parroted “science facts”—so too do the images themselves return repeated in different iterations, again and again. As far as I can tell, the primogenitor of all these graphics is the below photo, the original photographer’s identity lost in the mists of time. 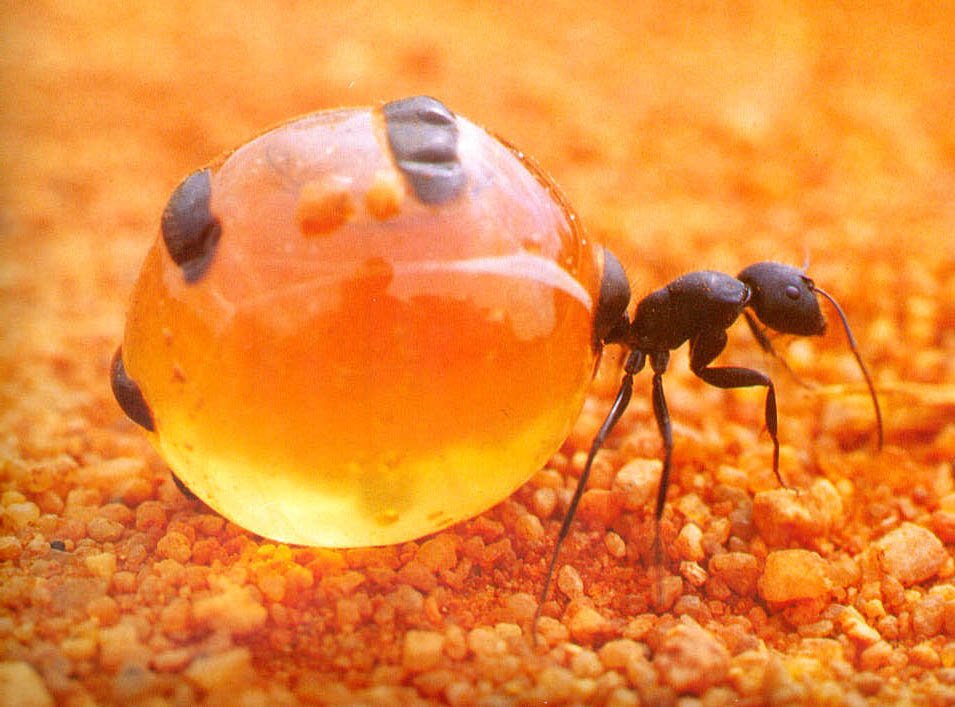 The ancient Ur-photo, that from which all other images spring.

Look and be appalled: even the above mural is little more than a trace of this one photo. Being that this is a bee-yoo-tiful example of a cultural meme—whose ancient Greek root μιμητής (mimētḗs) aptly means “pretender/imitator”—it is only fitting that this same photo has been thoroughly regurgitated as an Internet meme as well. REDDIT PHOTOSHOP BATTLE BEGIN!! 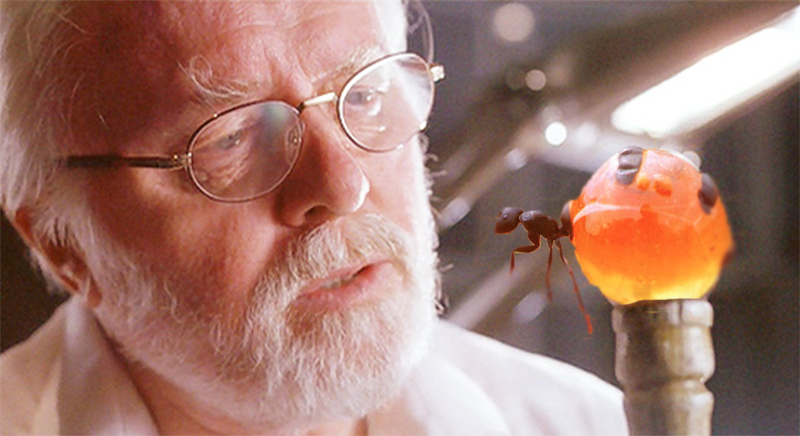 Aragorn stares into a pal-ANT-ir, get it?? (Reddit user BrotherSeamus) 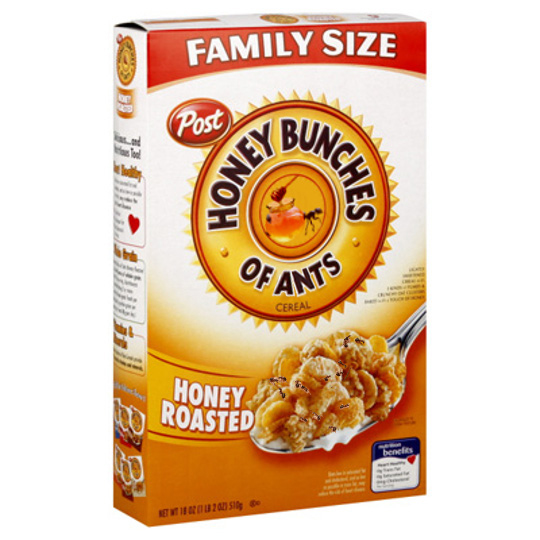 I had to include this last one for fun, but doesn’t this real-world, homemade plushie bear an uncanny resemblance to our progenitor photo? 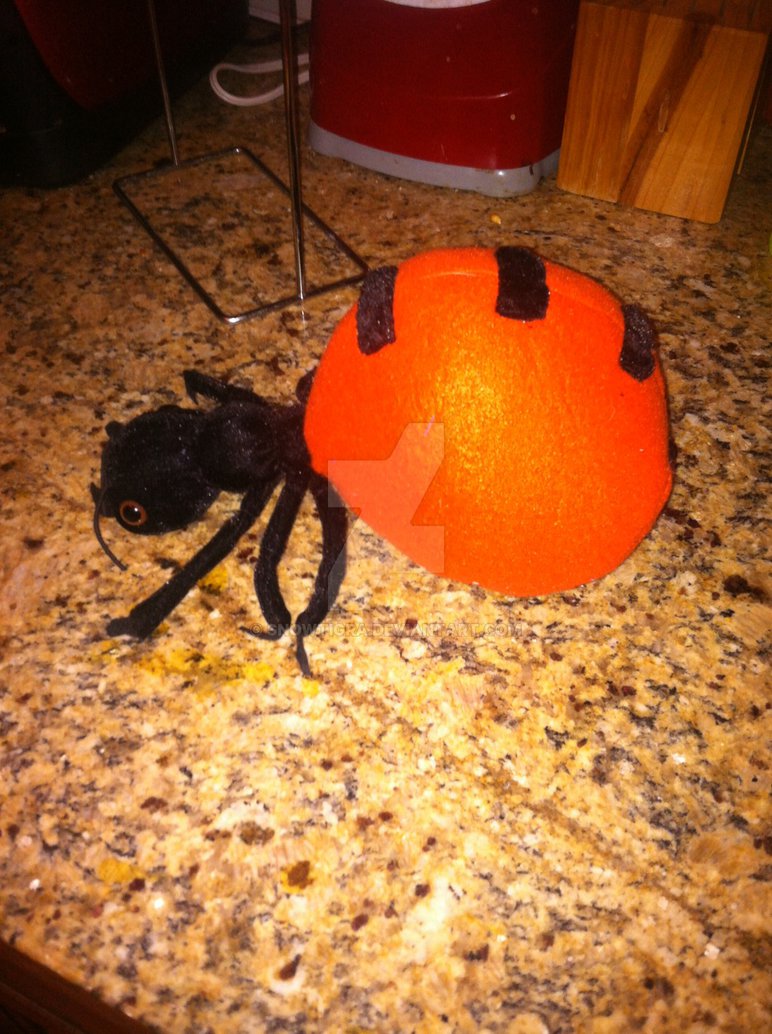 WHERE CAN I BUY ONE?! (Deviant Art user snowtigra)

However, in a beautiful parallel to our knowledge of these ants, there does exist original, less derivative art out there. One big source of this—both art and knowledge—is from the Indigenous Australian peoples.

For those not familiar with Indigenous Australians (also referred to as Aboriginal Australians), they represent over 400 different peoples who speak just as many unique languages (although quite a few of these are sadly no longer spoken). They are the world’s oldest continuous cultures, having arrived in Australia 40,000 – 65,000 years ago. Indigenous Australian cultures (like everything in Australia) are incredibly cool and unique, with very non-Western ways of living, being, and conceiving of the world. I’m not an expert by any means, but I do highly suggest learning more about them: I find it so fascinating. But when European colonists landed in Australia, the horrible, repeated sequence of events played out: Indigenous Australians were decimated by disease, pushed off their land, massacred by colonists, and stripped of many human rights. It wasn’t until 1962 that all Indigenous Australians could even vote. Naturally, such targeted genocidal behavior and systematic oppression have left their communities fractured and disrupted. Similar to the situation in U.S., indigenous communities are rife with health problems, poverty, and high suicide rates.

BUT! Anyway, many of these cultures have long traditions of digging up honeypot ant colonies and consuming those sweet, sweet honey repletes. They know how to find them, where to dig, and what these ants do. However, their relationship goes beyond that: honeypot ants sometimes feature prominently in “the Dreaming.” This stuff is really confusing for Westerners, but “the Dreamtime” is “a term for the animist creation narrative of indigenous Australians.” I wish I had more opportunities to learn more about this stuff, but suffice to say that honeypot ants and certain indigenous people are tight. Naturally, these ants feature in their art as well! 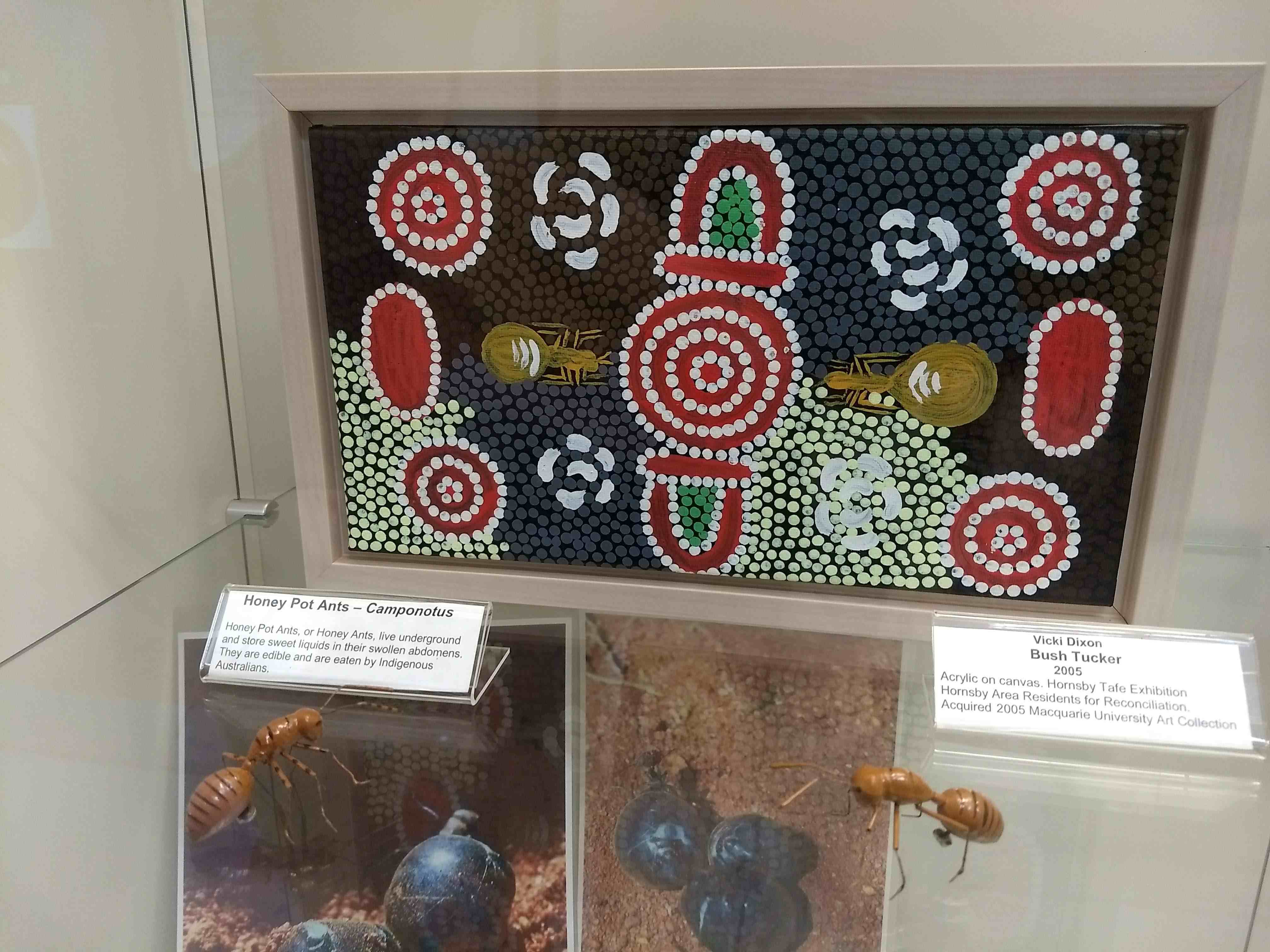 Honeypot ants are POPULAR. I mean, there’s even a display about them at the university I’m visiting in Sydney. The painting, though acrylic and somewhat amateurish, is in the style of indigenous Australian art. 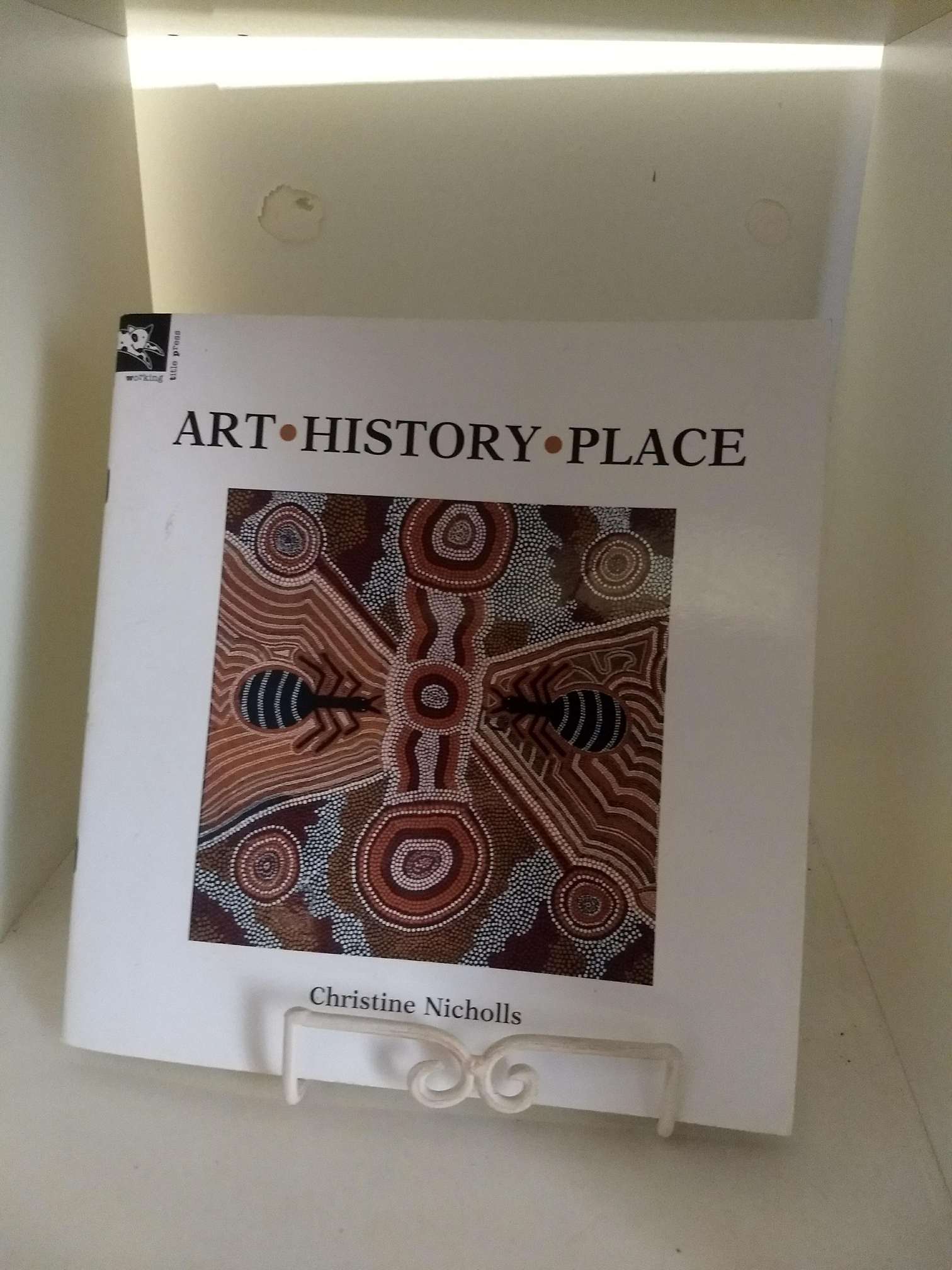 I took this photo in a museum gift shop. The cover art represents a more traditional, higher quality painting than the one in the previous photo. I think indigenous people mostly relied on ochres for color and didn’t really use colors like green.

Such art also encroaches into public spaces as well. In fact, one of the first “contemporary” indigenous art pieces was a honeypot mural. Below is the famous “Honey Ant Dreaming” mural painted in 1971, credited with initiating the contemporary Indigenous Australian Art movement. It’s a fascinating story, but even more intriguingly, the original mural was apparently revised because elders thought it revealed too many of their culture’s secrets. 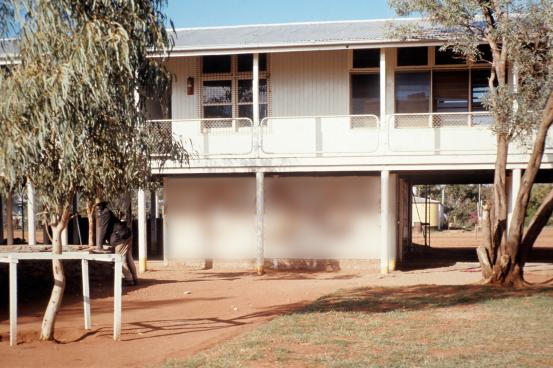 I think this might have been a photo of the original, so I decided that blurring the details out might be more respectful. "A Dreaming" is a weird intellectual property issue.

There are also more modern depictions in murals too, quite a few. 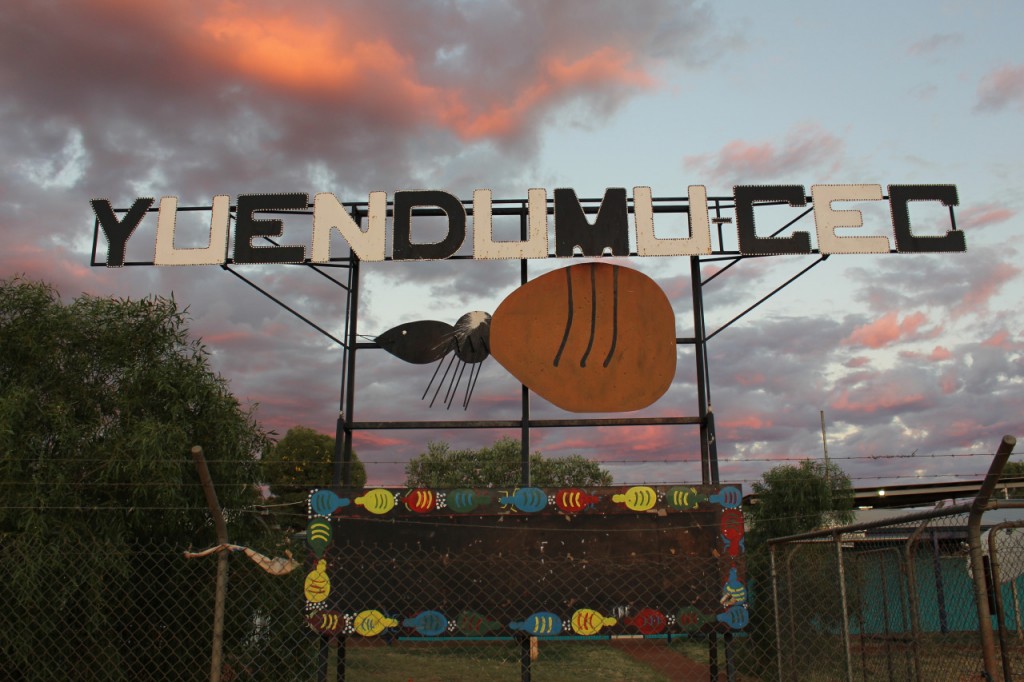 The town of Yuendumu knows what's up. They aren't afraid to show their ant pride. (Josh Evans from the Nordic Foods Lab) 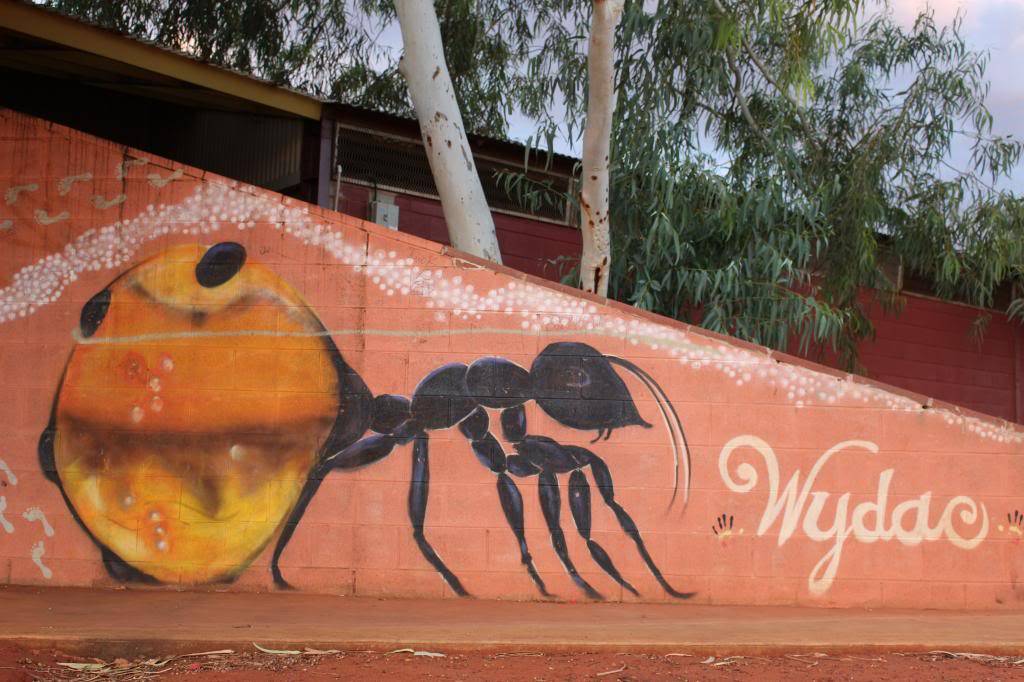 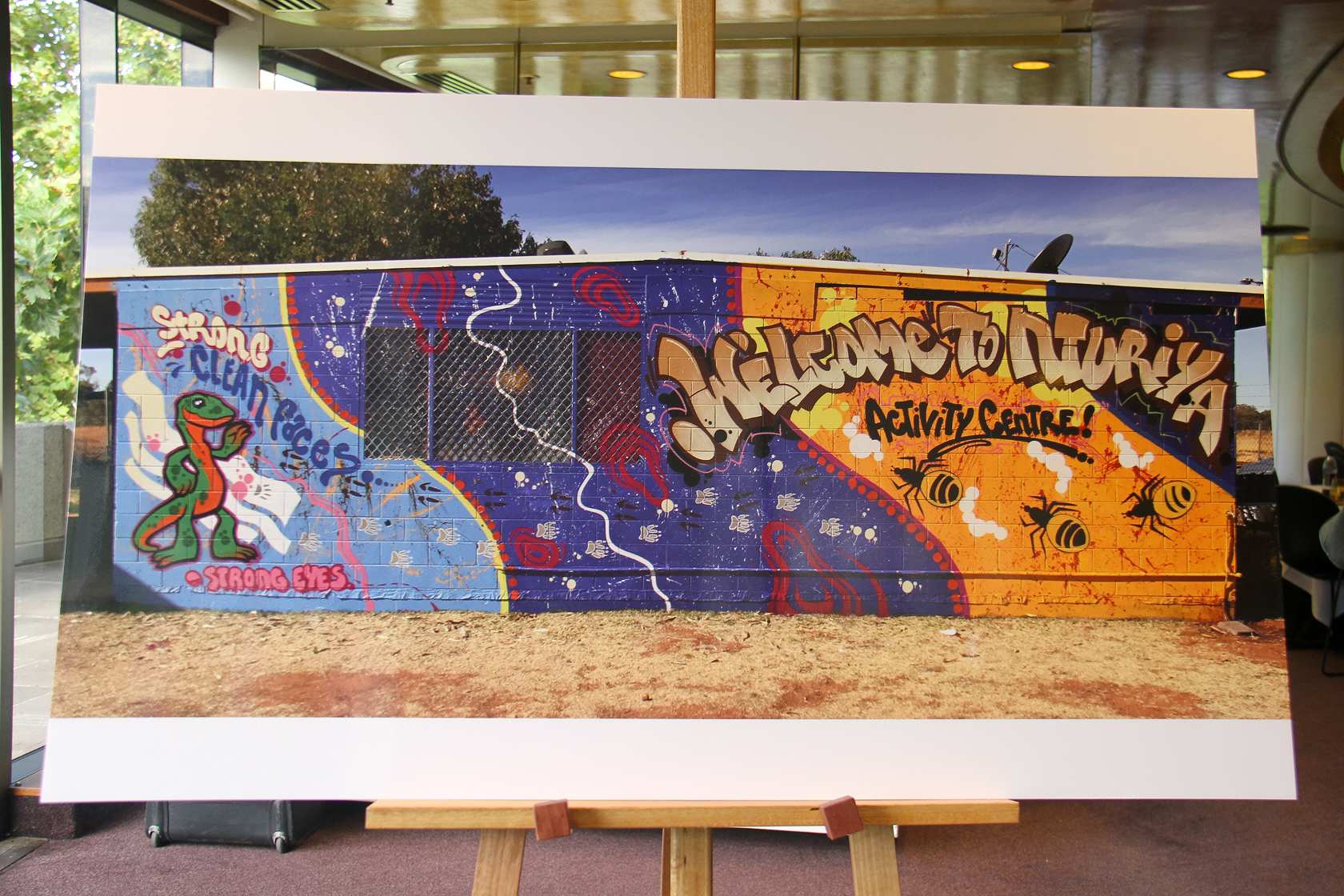 Here's a photo of a photo of a graffiti-style mural done in Nturiya. It's a collaboration between Andrew Bourke and local youth. 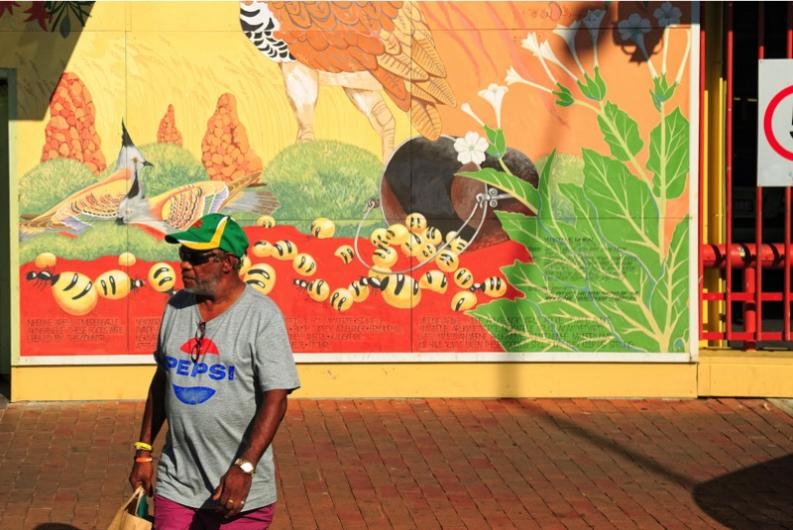 The ants spilling from a pail used to collect them and bring them home to eat. (Éric Tourneret)

Notice how these depictions are NOT “reprints” in the same way that the more Western images were copies. I personally think that an actual familiarity with these animals generates new, creative ways of depicting them. But in lieu of familiarity… you know what else generates this kind of creativity?